Arrived 16 Sep 1736 at Philadelphia PA on ship Princess Augustus.
According to the ship list he was age 25 on arrival. Thus he was born c1711.
He was born in Wuerttemberg, Germany, per local historical accounts of his life.
Died in 1761 in Upper Milford Township, in what is now Lehigh County PA.
His land was partially in Lehigh County (pre-1812 Northampton and pre-1752 Bucks)
and partially in Berks (pre-1752 Philadelphia) County PA.
He bought the tract of land in 1754 from John Dater, aka Tecter/Teeter (possibly was Dieter).


If you quote from or use information from my research and/or this website, please give proper credit and source acknowledgment.

Christman Family Article in 1884 History of the Counties of Lehigh and Carbon PA.

Back to Jacob Christman Page.

The maps below show the location of original land in present day Berks and Lehigh Counties PA owned by Jacob Christman, born c1711, died in 1761. The land straddles the county lines between Berks and Lehigh Counties, PA. Of the 150 acre original tract purchased per the deed description by Jacob in 1754, the largest part was on the Upper Milford Township, then Northampton (now Lehigh County) PA side of the county line, even though it was only described as the residue of this 150 acre tract of land in the deed. This area was and is to this day a mountainous and heavily wooded area. While the largest part of the original 150 acre tract was on what is now the Lehigh County side of the line, most of the present tillable farm land as shown in the satellite images is on what is now the Berks County PA side of the county line. The surmised original log cabin residence on the tract in 1754 must have been on the Berks County PA side of the line which is probably why the deed when recorded in 1760 in Philadelphia is legally recorded as being in Berks County PA. Berks County was established in 1752. Why the deed was recorded in Philadelphia in 1760 instead of in Reading, the county seat for Berks County, is not known except possibly maybe for the personal convenience of the seller or his legal representative. At some point in time between 1754 and 1761 another main/newer master residence must have been built on the then Upper Milford Township, Northampton County, (now Lehigh County) PA side of the line. By common law, where the master bedroom of the master residence is located determines where the owner living on the land is taxed. It is not known exactly where this 1761 master residence was exactly located but it was likely near the present tillable farm land. And at that time, it was still likely a log or wood type structure. The current beautiful stone residence on the present tillable farm land was built in 1848. It is circled on the right in the satellite image. It sits right on the county line and is taxed in Lehigh County PA. However, Jacob Christman was already being taxed as a legal resident of Northampton County (now Lehigh County) PA in 1761 when he died. His original 150 acres of land straddling the county line makes tracing the subdivision of the land over time that much more difficult since multiple county jurisdictions are involved over the course of the history as his land was subdivided and pieces were sold to others.

The marked locations in the below images and maps show the exact location per my research of the original land of Jacob Christman, born c1711, died 1761. I know this since I have found the location of the land of John Dater/Tecter from whom Jacob Christman bought the land in 1754. I found it in 1995 shown on an old survey map drawn by the early surveyor David Schultze. Many of his early surveys are in a collection found at the Schwenkfelder Library in Pennsburg PA. From that early survey showing John Tecters land and his neighbors, and the meets and bounds given in the deed naming the neighbors land, I have determined conclusively the location of the land Jacob Christman bought in 1754. The location of part of his original land is shown on Beryl Road on the right side of the images. On the left side of the satellite image below is shown where the "Christman Mill" is located on Weaver Road north of "Five Points", Hereford Township, Berks Co PA. This was an existing mill and property purchased in 1801 by Philip Christman (1755-1825), a son of Jacob Christman from Peter Keyser. Philip Christman then later sold this mill property to his son Henry Christman. Henry Christman is my Christman ancestor via his daughter Anna Maria, aka Polly Christman, who married Johannes Frederick Kerchner of Macungie Township, Lehigh Co PA. This mill property is not the original property. As I said, per my research, the original land and farm is the property located on Beryl Road and Crow Road straddling the Lehigh (then Northampton) and Berks Counties PA line. The same road is named Beryl Road in Lehigh County and is Crow Road in Berks County. A great-grandson of the immigrant Jacob Christman named John George, aka George Christman (1797-1866) built a substantial home at that location in 1848, part of the original land, right on the county line. However, based on the specifics of the residence's location it is taxed in Lehigh County PA. But most of the present tillable farm land shown in the satellite images is in Berks County PA. The current address for the residence is 7661 Beryl Road, Zionsville, Upper Milford Township, Lehigh County PA. Since 1976 and as of 2007 the property is owned by the Fleming family. This property is circled on the right in the satellite image. I visited the property several times in the 1990s and chatted with the current owner. I have a picture of the home on Beryl Road built in 1848 by George Christman which I'll have to get scanned in and uploaded. George emblazoned the fact that he built it, and when he built it, on the side of his new home, which is clearly visible and readable today.

Yahoo Maps Image View
In the image below, the circled area on the right is the location of the original land of Jacob Christman, born c1711.
The current residence located there, shown inside the circle on the right, straddles the Lehigh and Berks County PA county line.
The present tillable farm land surrounding the current structures there now was part of the Christman farm. While most of the original
tract was in what is now Lehigh County PA, most of the present tillable farm land shown now in the images is in Berks County PA.
The mill building and different property purchased by Philip Christman, s/o Jacob, in 1801, is located about 3/4 mile to the west
of the original Christman land and farm. The mill is circled on the left in the image. It became known as the "Christman Mill".
Some pictures of the Christman Mill property being restored. 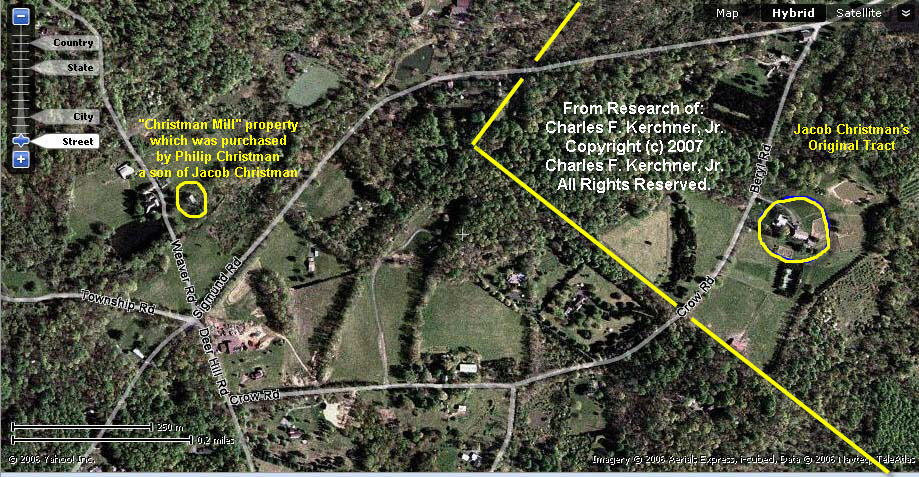 Location of Jacob Christman's Land using Google Maps Link
When viewing the satellite map using the link above, the present day buildings are seen in the cleared farm land area
below the "A" mark. Also depicted on the satellite map is the intersection of the five roads, aka Five Points, to the west
of the original land. The "Christman Mill" building is on the right side of Weaver Road, a short distance above the
Five Points intersection. The residence buildings for this mill property purchased by Philip Christman,
s/o Jacob Christman the immigrant, are on the left side of Weaver Road across from the mill.
Using the satellite map link above you can pan the image and zoom out and in to see neighboring areas.


Google Earth winter time image of area of Christman land with perimeter arrows drawn in yellow
to match the meets and bounds as described in the 1760 deed per my analysis.
Read the 1760 deed while looking at the below image and arrows. 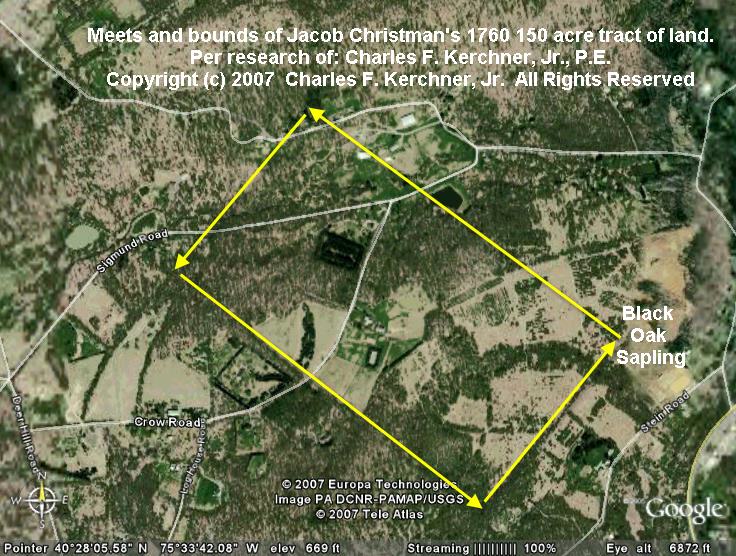 Location of Jacob Christman's Land using Google Maps Link. Using the above yellow perimeter arrows as a guideline,
you can see the patterns in the tree lines of some of the original tract boundaries in this satellite image .


Yellow shaded rectangle shows the location of Jacob Christman's 150 acre tract of land purchased in 1754 described in 1760 deed.
I drew this sketch on to a 1986 township map in 1995 while looking in that area for my Kerchner ancestor's land.
Most of the farmable land as can be seen in the current land satellite images above was in Berks County PA.
But the larger portion of the overall tract was across the county line in Upper Milford Twsp in what is now Lehigh County PA.
The county line passes through this track from the S.E. to the N.W. as shown on the township map. 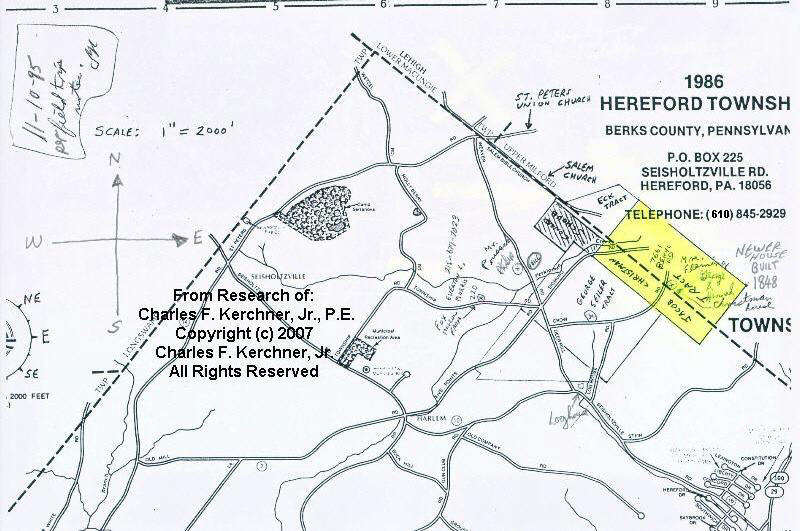 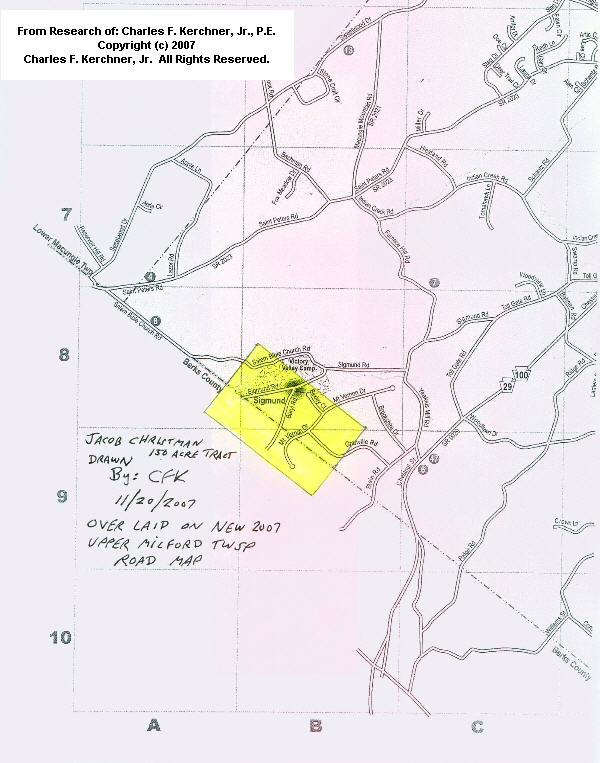 Location and Relationship of County Line to Local Roads
For the location of original land on below map find the intersection of the five roads to left of county line.
It is the "Five Points Intersection" shown in the prior maps. It is right below the blue line for the eastern tributary
of the Perkiomen Creek on the map which is where the "Christman Mill" was located. The original Jacob Christman land is
east of Five Points and straddled this county line. Present day Lehigh County PA is the upper right portion of the map.
Berks County PA is the lower left portion of the map.

Please feel free to contact me if you would like more information and/or have corrections or more information to share with me about this family. If you use information from research and this web page or website please give proper credit and source acknowledgment.